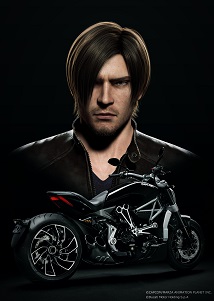 It was also announced today at Tokyo Motorcycle Show that the movie and Italian motorcycle manufacture DUCATI’s Japan office (famous and popular for its high-performance and stylish design) is now in collaboration by featuring Resident Evil franchise character.. Leon S. Kennedy riding the DUCATI’s newest series XDiavel in the action-packed scenes and at the climax of the movie.