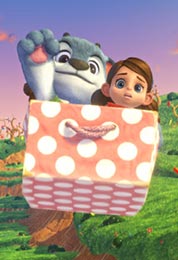 San Francisco, CA –March 16, 2016- Tokyo based MARZA ANIMATION PLANET INC. (MARZA) will debut the Unity rendered short-film
“THE GIFT” at the 2016 Game Developers Conference (GDC) in San Francisco. This short film was created using “MARZA Movie Pipeline for Unity” co-developed with Unity Technologies. The full short will be released on “THE GIFT” website: www.marza-realtime.com in April 2016.

A breakthrough in advanced technology for CG production, “THE GIFT” integrates MARZA’s forte — Hollywood style CG film production – made possible by Unity’s rendering engine. The new pipeline uses full, feature-quality character motions and shaders, and requires no “pre-rendering” via other programs. Moreover, contrary to the existing use of CPU for pre-rendering, Unity’s use of GPU has led to increased rendering speeds allowing directors and artists to simplify and optimize their interactions.

Using the Unity platform in movie production will not only radically change the process of CG movie-making, but will make it possible to share data and more easily integrate with game production, VR and digital content development across multiple platforms. MARZA will keep evolving this workflow in collaboration with Unity Technologies.

“Sega has continually created amazing game experiences, and by creating MARZA, has brought video game technology into the film arena,” said Shinobu Toyoda, Representative Director, Unity Technologies Japan. “We were excited to collaborate with them on the idea of making cinematic experiences come to life using Unity’s platform in conjunction with the MARZA movie pipeline. “THE GIFT” is a perfect example of what can be achieved, and is a wonderful story for everyone.”

Thanks to the collaboration with Unity Technologies, we are happy to announce that some of the key features in the “MARZA Movie Pipeline for Unity”are already available in open source under the MIT license at github, for Unity and the CG community at large.

For further inquiries regarding the contents of this press release, please contact: